“Always the best for the least” – this core belief reminds GK that it is at its best whenever it bridges the resources and technology of the corporate sector to the many needs of the marginalized in society. It is most exciting when this maxim is fulfilled – for instance, when building materials company ABC Phil., Inc. (ABC) worked hand in hand with GK Tabora Heights to waterproof the community’s multi-purpose hall roof deck.

ABC pioneers modern tiling technology in the country. In addition to tile adhesive and tile grout, ABC offers a wide array of building materials and prides itself in being able to address specific needs of various stakeholders in the construction industry. ABC spent a couple of days in Tabora Heights to forward its commitment to “provide innovative building solutions to pave the way for improved living conditions”.

For two days, ABC  worked alongside Tabora’s skilled workers in the application of the Aquashield Plus Waterproofing system, and the mortar topping with a Level T15 self-leveling screed system. Key personnel from ABC’s Technical, Lab, Design & Marketing team oversaw the project and supervised its completion. The waterproofing was finished earlier than expected and well before typhoon Karen’s landfall thanks to the enthusiasm of both ABC and the Tabora Heights workers – after all, the beloved multi-purpose hall serves as a library, classroom, and conference hall for the members of the community; the roof waterproofing only expands the MPH’s many purposes for GK Tabora Heights’ youth leadership and community building programs.

GK Tabora Heights has a storied background, one that truly exemplifies bayanihan. The area used to be owned by Tandang Sora (Melchora Aquino) and her family, before most of the lots were sold to private institutions – GK Tabora Heights used to be one such lot. In 2008, the residents mobilized themselves into the Tabora Heights Homeowners Association, and were able to negotiate and buy back the lot beside Tandang Sora’s old shrine. In 2009, they began participating in GK-led values formation programs and partnering with various individuals and groups to improve and empower their community. GK Tabora Heights has gone from fighting for their land, to finding more ways to take care of what they fought for.

It was provident that Tabora’s goals were in line with ABC’s objectives. This project, however, is only a stepping stone to a more fruitful partnership between ABC and GK – already, ABC has reached out to other GK sites in need of material, such as the 50 square meters’ worth of carpet tiles that were personally gifted by ABC to GK Baras in Rizal. Employees have also begun to volunteer in GK Fridays at GK Escopa Munting Pamayanan Village and Serbisyo Sabado at GK DMCI Village.  It feels as if GK and ABC have only grazed the surface; after all, in the mission to help others, the work never really stops. 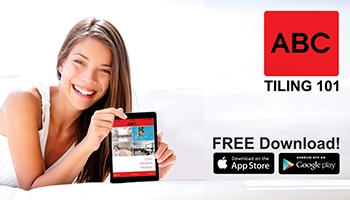 TILING 101 is an app to inform customers about our tiling products, view available tile grout colors and to estimate actual product consumption.